Let’s dive into the history of one of the most iconic garments of the last 80 years: the hoodie. Why? Because it might have something to do with a pattern that is coming up in a very short time? Who knows?  But one thing is for sure: from its humble beginnings in workwear and university sports programs to its emergence in couture and street fashion, the hoodie enjoys status as both staple and trend, making it a closet necessity for every one.

Artists like Kayne West, athletes, innovators and entrepreneurs like Marc Zuckerberg (Facebook) all wear hoodies. The hoodie has achieved an uniform status for the modern creative men. Hoodies even carry a revolutionary spirit and stigma that’s constantly under discussion in politics and culture.

As tribute to this universal wardrobe warrior, let’s take a look at key moments in hoodie history.

American clothing manufacturers began experimenting with fabrics traditionally used for undergarments to create sweatshirts and hoodies. Russell Athletics claims the first sweatshirt, created from cotton jersey, in 1920. They invented it to alleviate football players’ discomfort from sweating in wool jersey. Must have been a very itchy sport before the invention of cotton jersey… Champion Products, known back then as the Knickerbocker Knitting Company, is credited as the creator of the first hooded sweatshirt. It was marketed to cold-storage workers as a way to keep warm during work.

The ‘70s saw the hoodie’s transformation from a standard piece of clothing to a complicated cultural symbol. The New York hip hop culture adopted the hoodie as a useful way to conceal your identity. Ideal for graffiti artist while they were spraying their paint on walls and buildings. Suddenly the hoodie was linked to illicit activities and what was then perceived as a provocative subculture. 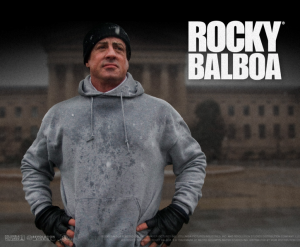 Highlight to the popularity of the hoodie was its iconic appearance in the Rocky movie in 1976. Rocky Balboa’s non-descript hoodie became a symbol for his hard work ethic. The hoodie became again connected to its working class roots and in the same time a part of mainstream culture.

In 1980, fashion designer Norma Kamali created her celebrated Sweatshirt Collection, revolutionizing ready-to-wear trends and the fashion industry’s perception and use of everyday materials in high-end design.

By the ‘90s, the hoodie’s established itself as a staple fashion item that could also be very trendy. It’s during this decade that  the term hoodie becomes part of our everyday language. The rise of hip hop into the mainstream and the popularity of urban fashion trends contributed greatly to his achievement.

No matter how widespread and accepted the hoodie has become, it still carries a lot of baggage. Marc Zuckerberg caused quite a stir when he chose to meet Wall Street investors wearing a hoodie. Was it a statement of just a ploy? Again the hoodie was subject of debate with the conclusion that Marc wearing a hoodie had more to do with his image as non-conformist than making a casual fashion statement.

In 2012, a teenager named Trayvon Martin was wearing a hoodie the night he was killed in Florida (USA) after being deemed “suspicious.” The tragic incident sparked a national dialogue surrounding perceptions about race, image, identity and class. The hoodie became a banner for supporters of Trayvon Martin, uniting those looking for justice for the life lost.

To date, the hoodie’s enduring legacy and cultural significance is a story without an end. Whether looked at as an utility garment, fashion trend or cultural symbol, one thing is clear: the hoodie, with all its virtues (and perceived negatives), is here to stay. And in 2016, hoodies are fashion favorite again!

And to celebrate the hoodie, Sleeves & Legs will dedicate her first (soon to be available) menswear pattern to this staple garment for every men! We are still looking for pattern testers, so if you want to be among the first to try out this pattern, drop us an email!